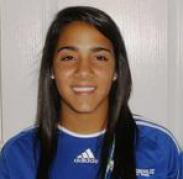 What factors play a role in your college decision:
- Academics
- Having the major I want to pursue

About Me:
I am seventeen years old and I have a twin brother named Agustin. I attend Clements High School and I am a junior this year. I have been playing soccer since I was six and I absolutley love it. I am on the varsity team at Clements and I am on AHFC 96G for club soccer. I play forward, right/left midfield, and defensive mid. I love working out and I love to challenge myself every day. Ever since I was in Teen Leadership and PALS in middle school my dream has always been to help kids with dissabilties and to better their lives. I love volunteering and getting the chance to make people's life better even if it's just for a day. I love getting to know new people and enjoy being with little kids. Eventhough, I enjoy hanging out with my friends, my family is the closest and most important thing for me. They always support me in my decisiones and are always there when I need them.

Congrats on your commitment to St. Thomas!