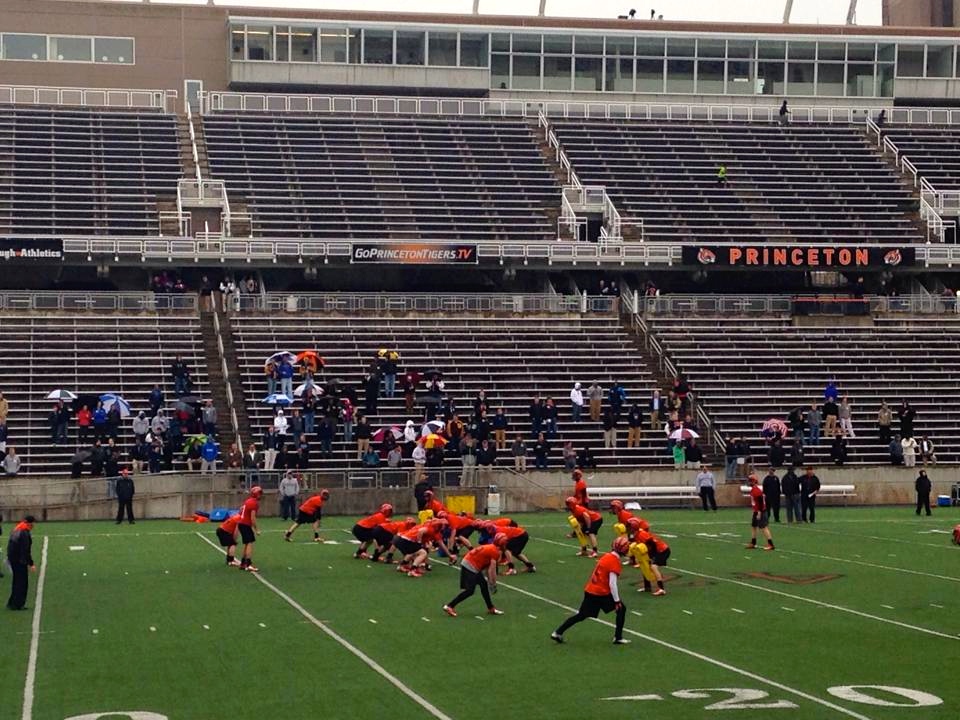 Of course it had to rain, but we took it all in stride.  We bought little umbrellas and my Dad took a little detour to the school store to pick up Princeton hoodies to keep us warm.  As I sat in the stands watching these athletes proudly wearing their helmets and jerseys as they warmed up, I realized just how much I want to be like them season after next.  A fire began to burn in my belly and the reality of how lucky a was to be there began to dawn on me.  Yes, there were a few hundred athletes and their families sitting in the stands with me.  But, I'm one of the chosen few, lucky enough to be counted among them.  How great is that?

We went out to eat lunch on our own and then came back to the indoor gym to listen to Head Coach Bob Surace give a presentation to a full house on what it means to be a Princeton Tiger football player and a Princeton student.  I found out that I was just one name from a database of 25,000 student athletes.  Out of those 25,000, I was one of about 2,500.  By the end of camp season, that list will be whittled down to about 150.  I want to be on that list.

After the coaches presentation, we were split into groups to go on a rainy tour of the campus.  I was in the QB group with about 80 other QB's.  We walked/ran through the campus and I had my glasses on, so couldn't really see much due to the raindrops covering my lenses.  But, what I could see was great.  Princeton doesn't have fraternities.  They have what is called, "Eating Houses".  Upper classmen live in dorms and have their meals at these huge brick mansion-like eating houses.  That's where they have their parties, get togethers, etc.  The football players generally join either the Cannon Eating House or the Cottage Eating House.  Both looked pretty cool as I walked by trying to see through the raindrops.

I've signed up for the July 12th camp, so hopefully, that weekend will be bright and sunny so I can see the campus in all it's glory.  In the meantime, I'm working on raising my SAT score from 1700 to over 2000.  And, I'm going to do my best to earn strait A's this last quarter.

Wish me luck.  Next week we go to Midwestern State in Witchita, Texas for their Spring game.  The week after that it's off to the University of New Mexico for their spring game.  What a great life I live.